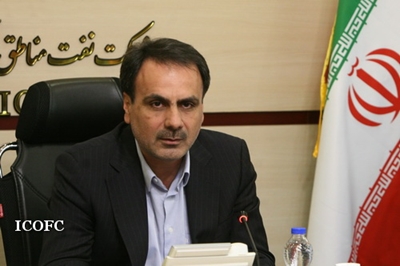 Ramin Hatami, CEO of ICOFC, tells" Iran Petroleum" about the plans and priorities of the company for the current calendar year.

Was last calendar year satisfactory for ICOFC in terms of production and development?

Last calendar year, ICOFC with a 257 mcm/d gas production during the winter peak, went beyond fulfilling its gas supply obligations. Despite unlawful sanctions and financial restrictions imposed on Iran, domestic expertise was used for drilling 9 new wells and doing workover on 7 wells by using 8 drilling rigs in order to guarantee sustainable oil and gas production. Furthermore, after 285,000 persons-hours of overhaul and optimal use of domestic resources, the company produced over 70 bcm of gas last calendar year. Moreover, arrangements were made for budget allocation to 16 plans, 80 projects and 1,650 subprojects.

How was the situation with regard to stability in the gas transmission network?

In order to ensure the guaranteed supply of gas to households and industries during cold months, 2.5 bcm of gas was stored in the Shourijeh D and Sarajeh Qom storage facilities in warm seasons. In the cold months of the year, in a bid to make up for shortages of gas injection into national trunkline, more than 2.6 bcm of stored gas was reproduced.

How much was the stored gas higher year-on-year?

If we want to review the details of ICOFC"s performance last calendar year, what are cases in point?

What projects are concerned in favor of production prosperity?

Last calendar year we witnessed implementation of various projects whose objective was to enhance the oil and gas production capacity. In response to your question, I can specifically refer to the operation of gas gathering centers in the Khangiran gas field, installation of wellhead equipment and pipelines at Well No. 77 of Khangiran, an addition of 1 mcm/d of gas output, reparation of two well caps without having to install rigs to save IRR 178 billion, conducting 146 kilometers of pigging, operating two oil wells in Saadatabad, starting up EPDF/EPCF projects at the Saadatabad oil field, Naftshahr and Danan, manufacturing and repairing more than 521 items of commodities used in the oil and gas industry.

In light of the current calendar year"s slogan, i.e. jump in production, how are you going to support domestic manufacturing?

Last year, the company produced downhole cameras by breaking foreign companies" monopoly, manufactured casing, drilling bits, junk mills, demulsifier, packing for pumps" mechanical seal with nanotechnology, repaired gas compressors and other widely used items of oil and gas wells in support of domestic manufacturing to empower domestic companies. In the current calendar year, the company will continue to support qualified manufacturers of oil and gas industry equipment, and we will move in this direction by relying on the central workshops of subsidiaries.

Research has been a major focus of Petroleum Ministry over recent years. What were your major research activities last calendar year?

In the research sector, we plan to sign agreements for lab-scale studies on the process of water and gas-based enhanced recovery from the Bangestan and Asmari reservoirs of the Danan field, conduct lab-scale studies on the process of enhanced recovery from the Danan field reservoirs, sign two research agreements with the Petroleum Ministry and a nano-technology company, conduct gas wetting research projects, decontaminate soil by applying biological methods, build dual frequency desalter and conduct studies on corrosion.

Which projects are prioritized in the current calendar year?

Would you please provide more details on the flare gas gathering project you just mentioned?

The flare gas gathering project is under way for the first time by ICOFC in Naftshahr and Saadatabad for the purposes of protecting the environment, creating value-added and creating jobs. This project has led to gathering 12 mcf/d of gas in the Naftshahr and Sumar oil fields run by the West Oil and Gas Production Company and gathering 14.1 mcf/d of gas by two private companies in Sarvestan and Saadatabad, run by the South Zagros Oil and Gas Production Company.

Do you have any plans for gas development and production projects?

ICOFC is involved in major gas projects including gas storage at the Shourijeh-D gas field with the objective of injecting 10 mcm/d of gas during eight hot months of the year so that 20 mcm/d of sweet gas would be reused during four cold months, development of the second phase of the Dalan refinery for the purpose of processing gas supplied by the Aghar field, developing the second phase of the Tang Bijar gas field and establishing the Tang Bijar gas compressor station, building the Kangan gas compressor station to keep production ceiling at 40 mcm/d, reconfiguring the Naar field compressor station to preserve the production ceiling at 18 mcm/d, building the Homa and Varavi compressor station and the Tabnak separator station.

What plans are under way to maintain oil and gas production?

We will follow up on oil and gas production capacity maintenance projects by locating and drilling 13 new wells, as well as establishing wellhead installations and pipelines on drilled wells. It is noteworthy that following instructions from the Minister of Petroleum and NIOC Board of Directors on the strategy of oil and gas fields development and maximum efficient recovery, comprehensive studies have been conducted on the Tabnak, Shanol, Varavi, Aghar and Dalan gas fields, as well as the Naftshahr, Sarvestan and Saadatabad oil fields within the framework of five packages to determine the reservoir"s features, develop subsurface and surface patterns, predict the field"s performance, carry out economic calculations and provide enhanced recovery plan.Studies on seven oil and gas fields had been assigned to consulting companies. They are now in their final stages with results expected in coming months.

Last calendar year you announced most sophisticated and largest 2D and 3D seismic testing. What stage is it in now?

How has your company dealt with corporate social responsibility (CSR) in recent years?

Given the extent of ICOFC work from northeast to south and west, when Iran was hit with heavy flooding last calendar year, ICOFC tried to fulfill its CSR obligations. By providing relief aid to flood-stricken areas in Lorestan, Khuzestan, Khorasan Razavi, Fars and Sistan Baluchestan provinces, ICOFC played its role. Creating routes in inaccessible areas, supplying power and water to villages in the Sarkan, Malkuh and Sarakhs areas, providing local residents with food stuff, dispatching light and heavy machinery and providing medical services were among ICOFC"s measures in assisting flood-stricken areas.