Recently, Minister of Petroleum Javad Owji oversaw the signing of eight contracts for gas gathering east of the Karoun River. The minister said then that flare gas gathering projects would be completed before the 13th administration bows out. 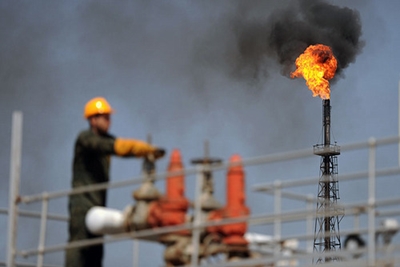 Recently, Minister of Petroleum Javad Owji oversaw the signing of eight contracts for gas gathering east of the Karoun River. The minister said then that flare gas gathering projects would be completed before the 13th administration bows out.

The cooperation of the banking system with the oil industry is an issue that has been neglected for many decades and this issue is considered as one of the factors of the country's economic underdevelopment. Establishing and strengthening the mechanisms for the presence of the banking system in the oil industry, in addition to filling the gap of lack of financial resources for the implementation of oil industry development plans, will lead to sustainable and economic efficiency and profitability of the country's banking system. Over recent years, the banking system has been severely criticized for its engagement in the country's economy and the tendency of banks to serve as dealers as intermediaries in the housing, car and foreign exchange markets because its presence has resulted in nothing but intensification of market chaos.

For years, the petroleum industry, under the unjust and unilateral sanctions imposed by the West, has not been able to seriously benefit from foreign direct investment in the upstream and downstream sectors. Petroleum Ministry and industry managers are trying their best to keep the oil industry development running with a view to development objectives by relying on Iranian companies and banks.

In the meantime, one of the important projects of the petroleum industry, has been to gather associated petroleum gas. Prior to the 1979 Islamic Revolution, due to the non-operation of independent gas fields, a small portion of associated gas was collected and processed to be fed into Iran Gas Trunkline 1 (IGAT-1) for urban gas and power plant supply. Iran was also exporting gas to the Soviet Union.

The Petroleum Ministry of the 13th administration has decided to use new methods such as utilizing the power of industrial holdings to invest in the upstream sector, such as gathering and processing associated gas, in order to prevent flaring. The decision, which has been welcomed by petrochemical plants due to its sustainability in feed supply, led to the recent signing of a $500 million East Karun gas gathering contract and the signing of a West Karun flare gas capturing contract with the Persian Gulf Holding Company.

According to international documents, Iran’s oil industry has pledged to reduce its greenhouse gas emissions un-provisionally by 4% and provisionally by 8% by 2030. The Petroleum Ministry is now considering steps to prevent environmental pollution and fulfill its commitments in associated gas gathering.

During the past years, steps have been taken to determine the task of this category, including the simultaneous implementation of 9 national projects with a total gathering capacity of 5.1 bcf/d of flare gas, including Bidboland Persian Gulf gas refinery (four LNG projects). Persian Gulf Yadavaran gas refinery (NGL 3200), Hengam gas refinery (Qeshm Island gas flare), (Dehloran) and NGL 3200, Maroun field, and NGL in Kharg Island.

Statistics provided by the Department of Corporate Planning of National Iranian Oil Company (NIOC) in 2016 shows that the flare gas to be potentially gathered amounted to nearly 43 mcm/d (more than 100 million barrels of oil equivalent a year).

Skid-mounted facilities are an option for ending associated gas flaring. Skid-mounted flare gas recovery systems are easy to install. For instance, a 100mcf/d processing unit may be built within 15 months and installed in three months, far less than the 10 years required for building an NGL unit in Iran. Skid-mounted processing equipment may separate gas condensate. Therefore, it is the most optimal method for increased production in Iran.

Capture and conversion of flare gas may have many economic and environmental benefits. In this regard, in a bid to prevent the flaring of associated gas and environmental pollution, fill feed shortages at petrochemical plants, produce light gas for industrial and domestic use and finally make optimal use of these gases, NIOC has prioritized the plan to collect associated gas in the Bangestan oil layer (AMAK), Ahwaz, Ab Teimour, Mansouri, Kupal and Maroun oil reservoirs.

Prior to the time that Amak project had become operational, 241 mcf/d of sour gas, associated with the Bangestan layer’s oil, was flared, emitting about 9,000 tonnes a day of pollutants.

During the startup phase, the first step included operation of four gas compressor stations, and a sweetening refinery.

With the completion of the first phase of the Amak project, the economic step of the project including 17 sour gas compressor and dehydration stations, a sour gas condensate refinery, 280 km of pipelines and 95km of power transmission lines and several substations was realized.

Following the operation of the last pressure compressor station in 2009 and an acid gas desalination plant in 2021, 28,000 b/d, worth $1.68mn, of gas liquids was produced. Moreover, 182 mcf/d of gas, worth $780,000, is delivered to National Iranian Gas Company (NIGC). Therefore, the gas and condensate recovered from this project is valued at $2.46mn.

The second phase of the Amak project is environmental, which includes 96km of 12-inch pipe. That helped prevent the flaring of 14 mcf/d of acid gas to allow for the delivery of up to 18 mcf/d of gas to the Razi Petrochemical Plant.

According to the CEO of National Iranian South Oil Company (NISOC), Iran’s crude oil production capacity is 3.8 mb/d, of which 3 mb/d coming from southern regions. Associated gas is key feedstock for petrochemical plants, which may be used for domestic consumption. However, the required credit was not allocated to this project by previous administrations.

With the implementation of the Amak project, about 86% of the associated petroleum gas is currently gathered in oil-rich southern regions, which is allocated to domestic consumption or injection into oil reservoirs for maximum efficient recovery (MER).

Numerous projects have been formulated by the NIOC Directorate of Corporate Planning with a view to recovering flare gas. Some of these projects have already become operational and some others are close to coming online.

On the other hand, by attracting investors, the Aghajari and Gachsaran gas gathering projects are being operated at the rate of 593 mcf/d and Karoun and Maroun projects at the rate of 249 mcm/d.

License has been granted for the finalization and financing of a project to cut gas flaring by 20% at ten refineries in the South Pars gas field with a view to stopping the flaring of 2.3 bcm a year of associated gas. That would be one of the largest environmental projects in the petroleum industry.

The comprehensive sustainable development project is aimed at the integrated management of all refineries and facilities at the South Pars gas field, as well as refining South Pars pollutants, including oil, gas and petrochemicals. Under the aegis of cooperation on the part of NIGC and National Petrochemical Company (NPC) managers, this project has made progress in the three sectors of management of refining and consuming polluting gases, managing polluting liquids and managing polluting solids (specifically sulfur).

Due to the high economic value of flare gas and the indirect benefits that come from gas gathering, different countries in the world have made large investments in this area and have been able to reduce the volume of their flare gas to a large extent. Persian Gulf countries such as the UAE, Kuwait and Saudi Arabia are among those countries that have ended flaring at oil fields.

In general, considering that flare gas gathering in addition to direct economic benefits has many indirect benefits such as reducing environmental pollution and in the Sixth National Development Plan, special emphasis has been placed on gathering flare gas, the Petroleum Ministry should take this path more seriously and quickly.

For these projects to be more successful, it is necessary to reduce the investment risks in this field and to price the products that are to be produced from the captured flare in such a way as to encourage the investor to step in.