Fars Province is the second largest province in terms of gas reserves, behind Bushehr Province. Fars Province has a gas production capacity of 114 mcm/d, mainly from the Aghar, Dalan, Tabnak, Shanol, Varavi and Homa fields. 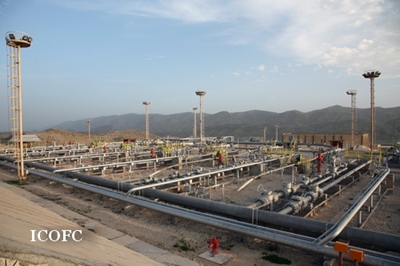 Fars Province is the second largest province in terms of gas reserves, behind Bushehr Province. Fars Province has a gas production capacity of 114 mcm/d, mainly from the Aghar, Dalan, Tabnak, Shanol, Varavi and Homa fields.

Minister of Petroleum Javad Owji recently said the government planned to invest in the upstream gas sector in order to enhance recovery from a number of fields including those mentioned here.

The Aghar gas field is among large onshore gas fields in Iran. It is currently producing 20 mcm/d of gas. Iranian Central Oil Fields Company (ICOFC), which supplies more than 40% of Iran’s total gas, is in charge of development of the Aghar field.

Gas production from Aghar began in 1999. Natural gas and condensate are separated after production to be delivered to the Farashband gas refinery for processing through two pipelines. Each pipeline is 90 kilometers long.

In parallel with the plan to double the Aghar gas output, installations would be built near the Farashband gas refinery for processing.

The gas produced at the Aghar field is planned to be injected into southern oil fields, including Maroun. This gas field has wellhead facilities, four gas gathering centers, pipeline to carry gas from wells to central facilities and finally the Farashband refinery, a gathering and separating center, controlling room, pumping station, and pigging systems.

Aghar gas field was studied with a view to updating previously conducted studies, incorporating new findings and completing previous studies through interpreting and assessing petrophysical diagram, and modelling of fractures. The studies, which lasted four years, were led by the Department of Reservoirs Studies.  The main finding of these studies indicated that the field’s in-place gas deposits are up 40%.

The final recovery of over 71% of in-place reserves of this field has been done. In the natural depletion scenario, in light of wellhead pressure restrictions, the final recovery rate is set at 34.7% with a production ceiling of 22 mcm/d by 2023, when the installation of a compressor would bring the recovery rate to 71.5%.

Halegan is among Iran’s dozens of gas fields whose investment plan has been presented over recent years.

Halegan is located in Fars Province in southern Iran. It is 73 kilometers north of Assaluyeh and 25 kilometers south of the Sefid Baghoun gas field. It neighbors the Sefid Zakhour and Dey gas fields from north.

In a bid to gain a 15% share in global gas trading, Iran is implementing gas efficiency plans in the housing, commercial and industrial sectors and is firmly seeking to enhance its gas production capacity. To that effect, onshore fields are in the limelight for domestic and foreign investment due to easy access and low investment needed for their development.

Halegan was discovered in 2005 when a 2D seismic test project was carried out on 1,000 square kilometers of land a year earlier in Fars Province. The seismic test ended in the discovery of Halegan and several other gas fields.

Halegan measures 50 kilometers long and 11 kilometers wide. It holds 12.4 tcf of gas (355 bcm) of gas in place, 8.938 tcf of which is recoverable thanks to a 70% recovery rate. Such high recovery rate is unprecedented for gas fields in Iran.

Halegan's gas and condensate deposits are estimated to be valued at $83 billion, while discovery of this gas field had cost only $36 million over 2.5 years. Development of Halegan would allow a sustainable output of 50 mcm/d of gas over a 20-year period.

The director of Exploration Directorate at NIOC has said that exploration drilling operations were very tough and slow due to stiff land composed of high-pressure layers. A 4,999-meter deep well was drilled in order to yield better results. Later on, several reservoir layers including Kangan, Upper Dalan, Nar and Lower Dalan, were appraised. In the end, the field was estimated to hold 12,400 bcf of gas. The significant point with the discovery of this gas field is that all geophysical, reservoir and petroleum engineering studies, as well as reservoir layer tests were handled by the Directorate of Exploration of NIOC.

Fars Province is a gas hub in the Middle East region. Some exploration studies in this province have proven the existence of huge gas reserves. Halegan is the latest gas reservoir whose existence was proven there. Compared with gas fields located nearby, Halegan has bigger dimensions.

Iran's efforts to return to its genuine standing among gas exporting countries herald a tough road ahead in coming years.